One minute, title tags are a must-have—the next, Google is replacing them with their own clumsily crafted titles.

While it’s no secret that Google will, at times, rewrite your titles and meta descriptions for greater accuracy, this summer’s algorithm updates have led to uncharacteristically sloppy search results. Some titles appear incomplete, while others (seriously) miss the mark.

The SEO community is now left reeling from an algorithm update that was carelessly handled and scrounging for more information on what’s yet to come.

The first major title rewrites were reported by Twitter sleuths mid-August. In mere weeks, SEOs were able to identify multiple examples of rewrites-gone-wrong. In perhaps one of the most horribly botched examples—POTUS has suddenly been demoted to vice president, according to Google. The article itself provides a brief history of President’s Biden’s run as the 47th vice president. Google likely picked up on the various mentions of “vice president” within the article (both in the body text and headers) and used them to craft this outdated title. In this example, the title for American Cruise Line’s cruise schedule is incomplete and nonsensical. It fails to meet Google’s long-heralded expectations of content relevance and natural language and, in fact, starts mid-sentence (“on the legendary Mississippi River”). Ironically, it’s paired with a sub-result that still has its title intact. “Welcome to SEO in summer 2021,” Ray comments dryly.

Example 3: Titles alter the intent of a page

WordStream picked up on a change to one of its own pages. The front page for one of its free resources had its title changed from “Free Keyword Tool” to “Learn More About The FREE Keyword Tool.” As pointed out by WordStream, this slight alteration made a big difference: “learn more” suggests that the link points to an educational article versus a ready-to-use tool. As a consequence, the click-through rate (CTR) for the page dropped 37% and the site was forced to change the H1 of the page to influence the right title tag.

Once again, the auto-generated title tag goes against Google’s commitment to relevant search results that closely match what the landing page offers. This example is also indicative of what SEOs may resort to doing in order to regain more control over their tiles: rewrite their H1s to serve as fallback title tags.

Example 4: Titles are being pulled from a completely different page 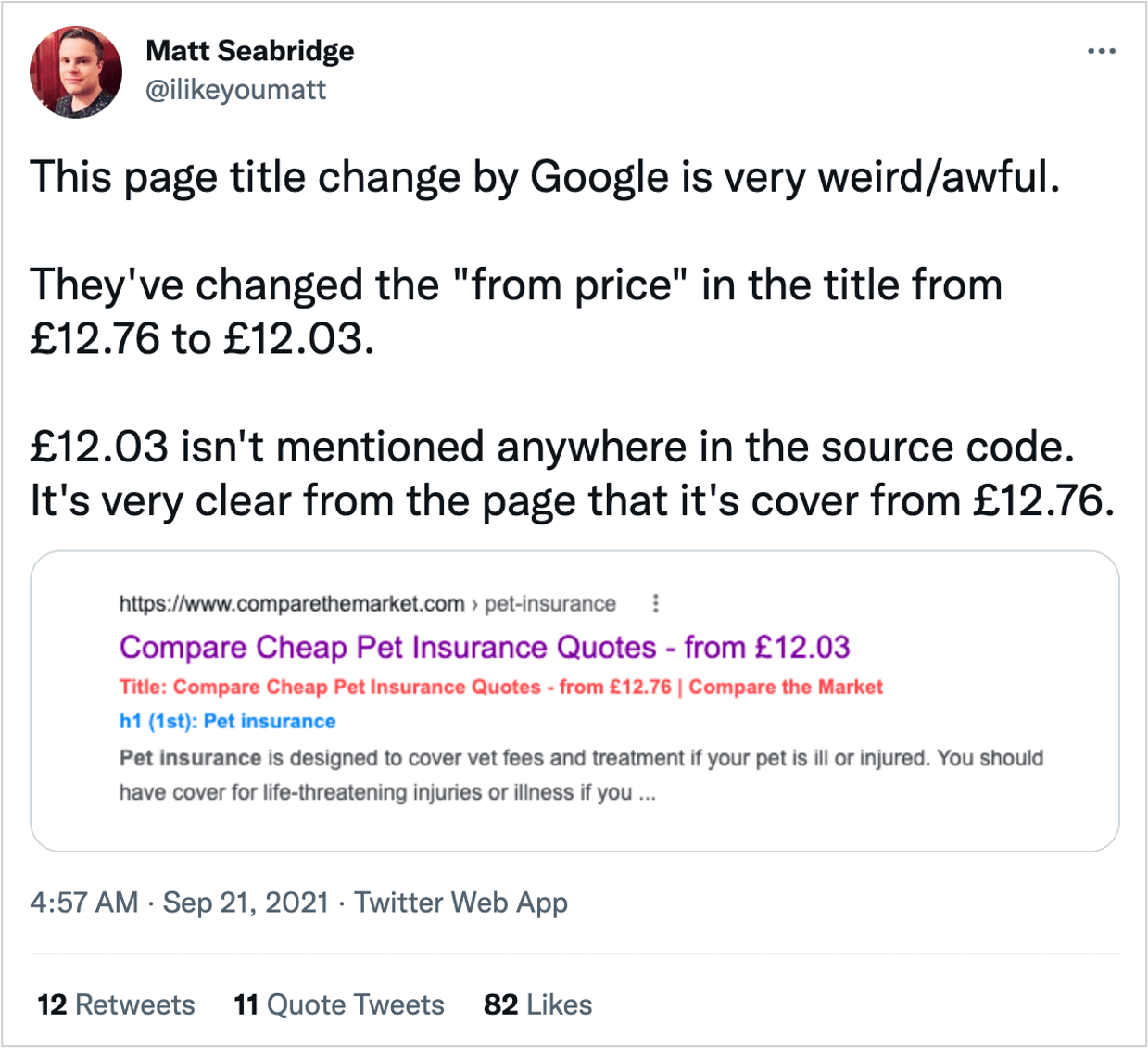 Apart from pulling titles from the H1 and headers of a page, Google appears to be using anchor text from internal or external links to generate its own version. In the example above, Google’s version features the wrong starting price (£12.03 as opposed to £12.76), which appears in old anchor text from referring pages.

Granted, there are instances in which anchor text has produced a few gems. However, it’s still an unnerving sign for SEOs, who may need to start auditing and paying special attention to anchor text. Text like “read more here” won’t cut it in this new reality. 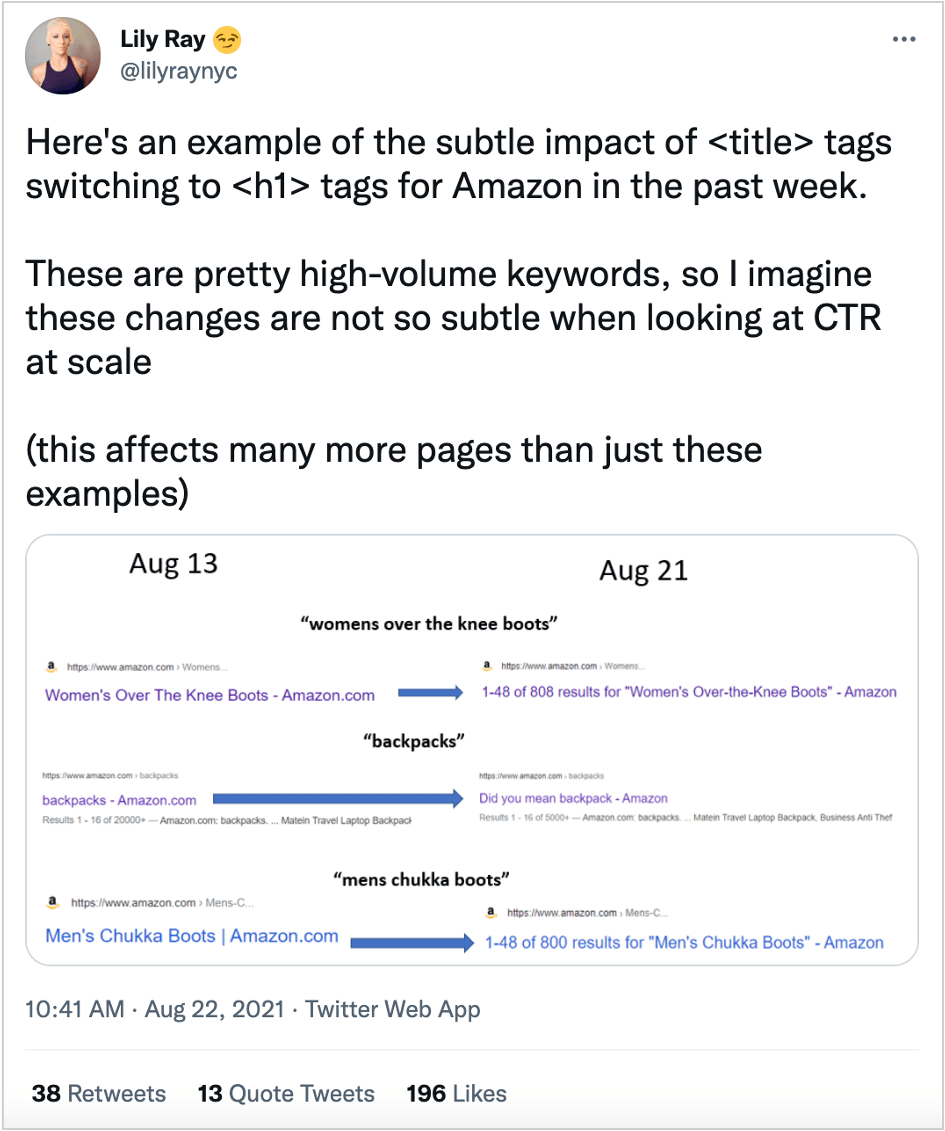 Ecommerce sites are among some of the victims hit hardest by the recent algorithm change. At one point, Google replaced the titles for Amazon’s product pages so that they were no longer specific to the product and instead featured headlines like “Did you mean backpack” and “1-48 of 808 results for ‘Women’s Over-the-Knee Boots.’”

These titles have since been reverted back (at least in Amazon’s case). However, it’s safe to assume that other ecommerce sites faced a dip in CTR—and in the worst cases, a drop in sales from the decline in visibility.

Hot take: the recent changes were a shot in the dark

Put nicely, the rollout of these extensive title changes served as a testing period for Google, which had good intentions but fumbled with the execution.

Said candidly, the rollout was a sloppy mess that had very real, very adverse effects on some sites and business owners. The SEO community is left with little confidence on how things will look moving forward. Will things return back to normal? Or, will we see more sweeping, permanent title changes?

If the latter comes true, we may see more SEOs and content marketers switching up their strategies to accommodate SERP-adjusted copy within their pages. This could impact the quality of H1s, H2s, and other critical text, whose authors may (understandably) prioritize keyword-driven, algorithmically appealing titles over more naturally written copy.

With title tags being some of the most important factors for getting a user to click onto your site, SEOs can’t afford to let their quality drop, no matter the instrument of change.

Google’s response on the matter

In late August, Google stepped forward and publicly addressed the matter by reinforcing the fact that dynamic titles are not new (“while we’ve gone beyond HTML text to create titles for over a decade”) and by conceding that the new system makes use of the  “text that humans can visually see when they arrive at a web page.”

The company states that it’ll review titles that are…

…but will continue using HTML titles tags a majority of the time. In September, Google issued another update saying that it will use title elements 87% of the time as opposed to the previous 80%. It additionally stated this Google may change tiles in cases of inaccurate, half-empty, obsolete, or boilerplate titles.

There are still questions left unanswered. In particular, many of the examples above don’t breach any of Google’s standards or appear to misrepresent their landing pages. Naturally, we’d be curious to know what really triggered some of the massive rewrites and what limitations are there (if any) as to where Google will look to create new titles.

Search Engine Journal surmises that the sudden uptick in rewrites may have something to do with Google’s testing of PAA (People Also Ask) features, which made more appearances in the weeks leading up to the title tag changes in August.

“When users interacted with the People Also Ask (PAA) features, those interactions were sent back to Google as data about what users mean when they search for certain queries as well as data about why they did not click on relevant search queries,” says SEJ. “So it may follow that how users interacted with the People Also Ask features may have contributed to helping Google understand that for a percentage of search queries some users didn’t click on relevant search results because of the title tags.”

Beyond this, some SEOs have pointed out key observations over the last several weeks: Keeping an eye on what’s to come

Needless to say that we’ll be keeping our eyes peeled for any new developments in this case. Got any hot tips? Tweet us at @RankScience.

Get data-driven tips for growing your traffic with RankScience.